When Roy Hudd Was Born They Broke The Mould!

On Monday 16th March 2020 we heard the very sad news that on the previous day Roy Hudd died after a short illness at the age of 83.

Roy had been born on 16th May 1936 in Croydon. He was a comedian, actor, presenter, radio host, author and authority on the history of Music Hall entertainment.

I can remember being charged with the job of meeting Roy when he and his wife Debbie were due to arrive at the hotel. On arrival he asked me if there was anywhere private he could go to in order to read through his notes. He seemed subdued and rather nervous. I guided him to the book room whilst another committee member took Debbie through to the dining room. About 15 minutes later Roy emerged from the book room a different man! He was smiley, confident and ready to start, and what an evening we all had! I have found the December 2011 edition of the WS journal, and this is what Adrian Morris wrote in his review:

“Roy is old school. He is one of those famous celebrities who is also a member of the human race. I normally fight-shy of celebrities. I’ve heard some horror stories of celebs being ghastly to polite requests from members of the public. That is not the case with Roy Hudd who was wonderful and professional throughout the evening, taking time to talk to people and to sign anything they put in front of him. He was also brilliant and funny during his talk. In a world where to be famous can mean you’re not really famous a tall (X-factor, Big Brother et al) it was a privilege to see a true professional with star quality. We love you Roy. Roy gave us a humorous and knowledgeable history of the music halls with anecdotes and songs and took time to mention the famous Wilton’s music hall in the East End.”

Adrian summed up the character of Roy Hudd so well. Little did Adrian know that I would be quoting him nearly 11 years later!

Roy and I exchanged a couple of emails after the conference and on 21st January 2012 he tipped me off that he had been in an episode of “Call the Midwife” and it was to be aired very soon. This was a classic episode, taken from the classic books of Jennifer Worth (if you haven’t read any, they are a must), part of series one of this classic long running series. Roy played the part of Joe Collett who was a retired soldier with no family and lived alone in a Poplar tenement.

Jenny was sent to care for Joe’s leg ulcers, in part caused by his time serving as a soldier. Initially, Jenny was repulsed by the state of his flat and appalled by the insects she encountered there, which were common to the tenements. However, over time she began to love and respect the old soldier and visited him to hear his stories after her shift was over. Joe’s leg ulcers improved and Jenny continued to visit and enjoyed listening to his life story.

Joe’s tenement was condemned and he was sent to a nursing home which was, in fact, the old workhouse building. Poorly staffed, it meant that the needs of the patients were not met. Neglect meant that Joe’s leg ulcers deteriorated. Jenny discovered this on a visit to Joe and raised the alarm. However, transfer to hospital came too late and Joe had to undergo a double amputation to his legs. He died shortly afterwards. Jenny was the only person present at his funeral.

If you didn’t see this episode (Series 1 episode 3) it is a must. Roy’s acting was superb! Was this the same man who had entertained us until our sides split only three months earlier, such was his versatility.

But Roy is probably best remembered for The Newshuddlines (1975 -2001) and his appearances, on and off, over a number of years in Coronation Street. In this soap he played the part of the undertaker, Archie Shuttleworth. He joked that whenever his character appeared in the programme, the rest of the cast got nervous because it meant that someone’s contract was not going to be renewed. So typical of Roy’s humour, along with titling his 2009 autobiography “A Fart in a Colandar”!

Our condolences go to Debbie and the rest of Roy’s family. Let’s finish with Adrian Morris’s words: 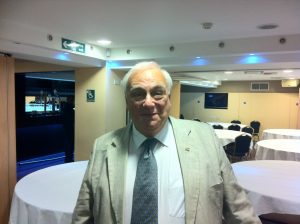