I approached the hostelry as is my custom via the claustrophobic litter strewn alleyway. Negotiating my way past a clutch of shabby, wheezing tobacco users and with the stench of fresh urine filling my nostrils I entered the side door and descended the rickety wooden staircase.

The stage was set for the February 2015 meeting of the Whitechapel Society 1888, in the suitably atmospheric dive bar of Dirty Dicks on Bishopsgate.

The meeting opened with Tony Miller, the Director of the Whitechapel Mission, accepting a cheque for £1,000 from the Society, presented by Mark Galloway. This sum represented the proceeds of the auction held at the 2014 Conference.

Tony gave a brief talk about the work undertaken by the Whitechapel Mission.

Without paying proper attention I had lazily assumed that the Whitechapel Mission was the organisation based at Mile End Waste set up by Frederick Charrington in 1870, to save souls brought low by his father’s brewery, a couple of hundred yards further up Mile End Road. But no, that is the Tower Hamlets Mission.

So what is, or was, the Whitechapel Mission?

Originally called the Whitechapel Methodist Mission, in 1897 they moved into the premises well-known to Ripper aficionados as the Whitechapel Working Lads Institute. This building played host to the inquests into the deaths of Martha Tabram, Polly Nichols, Annie Chapman and Alice MacKenzie.

The Working Lads Institute was founded to provide life skills for kids who have gone astray. To this day the Whitechapel Mission continues to aid the local community, serving about 300 rough sleepers every morning, including the street prostitutes who still haunt the area charging £5 or£10 a go. In many ways things have scarcely changed since the Institute was founded in 1876.

I have always been fascinated by the old Institute building. These premises, at 285 Whitechapel Road, were purpose built in 1885 and included a Swimming Pool which Tony told me was more of a plunge pool!

They sold the old building in the 1970s and now operate from anonymous but more practical premises on the other side of Whitechapel Road. The Institute is now in private residential use having been converted to flats.

Tony issued an open invitation to come and witness their work in person. I understand that he will be invited to address a future WS 1888 meeting at length and judging from the few words he gave us and the chat I managed to have with him before he left, this will be an event not to be missed.

Next Phil Hutchinson gave one of his customary introductions to the main speaker of the evening Ian Parson.

Ian will be known to many of you as he rarely misses a WS 1888 meeting and I’m equally sure that his novel, ‘A Secret Step’, will be found on a lot of readers’ shelves.

The topic for Ian’s talk was the ‘Dead End Kids’ – a gang of East End kids, unsung heroes who saved lives with their daring escapades during the last war.

Ian started by drawing comparisons with the present. The graffiti that adorns our street landscape are the silent marks left by children. The secret world of children – secret from adults – is almost timeless.

A little over fifty years after the Ripper murders, the East End faced another episode that was to ingrain itself on the local folklore – the Blitz. Many wartime East End grandparents would have been local nippers when Jack the Ripper stalked those same streets. Now they faced a more widespread, deadly and indiscriminate treat – the bombs of the Luftwaffe.

At the outset of war, the fear of indiscriminate bombing of civilian areas led to the immediate evacuation of thousands of children. But it was premature. During the so-called Phoney War there was no bombing. The evacuees got bored. It seemed pointless being in the unfamiliar countryside – so far from home, from the noises sights and sounds of the capital. In dribs and drabs they came back.

Then suddenly things changed. The returned evacuees got more than they bargained for. From 7th September 1940 the Luftwaffe bombed London ever night for 57 nights. One of their main objectives were the docks, concentrated in the East End and inevitably the surrounding residential areas were hard hit.

During this period many chose to stay above ground rather than seek deep shelter. Some for heroic reasons such as police and fire crew. But also many of the returned evacuees preferred to play games outside as the bombs fell, oblivious to the dangers.

A 21 year old dock worker called Patsy Duggan organised a gang of these adolescent children into a group of unofficial fire fighters. They were bored. To them the Blitz was a time of excitement – an opportunity to test their wits, their daring, their pluck.

Churchill was to call London’s fire fighters ‘Heroes with grimy faces’, adapting the name of the 1938 Hollywood film ‘Angels with Dirty Faces’.

Duggan’s christened his group the ‘Dead End Kids’ after a well-known group of child actors who appeared in a number of Hollywood gangster films – strangely enough including ‘Angels with Dirty Faces’.

Based in Watson’s Wharf in Wapping, Duggan split them into groups of four and scavenged primitive equipment – crow bars, sand buckets, ropes, spades, all carried on hand carts. To them it was real, but it was also a great dangerous, thrilling game – an opportunity to show off. Sometimes they might retrieve items for their own use – although technically that might be termed looting. Against that they excelled in life-saving missions – running into burning buildings, stretchering people to safety and even roping live incendiary bombs and throwing them into the River

In the ‘London Fire Journal’ it was recorded during one bombing raid ‘In a moment 10 boys rushed up the stairs, ready, as it seemed, to eat fires.’ They emerged, ‘with the clothes of some… smouldering’.

Some of these children died but there was never any shortage of replacements.

Eventually the ‘Dead End Kids’ came to attention of powers that be and a propaganda photo shoot was arranged with Winston Churchill. But allegedly one of them irreverently blew off in front of Churchill and as a result of that fart any press coverage dried up.

I have a feeling that this story is apocryphal as many of the ‘Dead End Kids’ stories have a mythological feel to them, and I’m sure some tales grew with the telling. One of the main post-war sources was a Labour Mayor of Stepney who had a political vested interest in dissing Churchill and promoting an image of plucky self-reliant working class youngsters.

Ian Parson concluded by drawing comparison between the London of the 1940s and 1888 – which was the inspiration for his novel.

Although a lot of the 1888 slums had been demolished by then with a lot of estates built between the wars, many remained. Indeed slum clearance was one unintended consequence of the Blitz. But the East End was still a poor area – as it remained – with bad sanitation and health problems. People tended to have limited expectations. But they knew no better.

Just as the ‘Dead End Kids’ were not traumatised by the Blitz but almost regarded it as a massive game, so the 1888 kids made light of the Whitechapel Murders as illustrated by the skipping game:

Jack the Ripper stole a kipper

Hid it in his fathers slipper.

The kids of 1880s and the kids of the 1940s knew the same hiding places, the same short cuts and alleys. They played on the same streets.

To an extent that link back to 1888 endured until recent times. 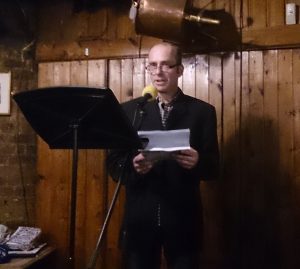